I’m not sure many folks know this, but I didn’t until I stumbled upon it: Saint Paul residents having a valid and up-to-date library card can access lynda.com online training for free, and you don’t need to be in the library to use it (like you do for some references, like ALLDATA).

It can be a little confusing to sign in. This worked for me:

You should be in and may need to enter a little information to set up your profile.

Open Terminal, and type finger <yourcity>@graph.no replacing <yourcity> with, well, your city. So like:

William and I made a Bluetooth wireless arcade game controller. :)

Project inspired by this project on the adafruit web site. Using the controller with MAME OS X.

We recently got a Blade Nano QX 3D and it’s really quite cool. However, after not really very much flight, and no poor treatment, we had to get replacement motors as one of them just stopped working.

I got official replacements from a local hobby store, but they seem… weaker. We tried both new motors in the front right spot. The motor works but the help can’t get off the ground anymore.

Anyone have ideas on how we can resolve this?

Will and I have been working on some electronics fun, mostly because I wanted to try this Instructables using a microprocessor.

Of course, this was one of those things where you need to complete some projects in order to do the project. In this case we needed to build an AVR programmer so we could program the microprocessor (an ATtiny85). Building the programmer was fun, and Will did a whole bunch of the soldering! 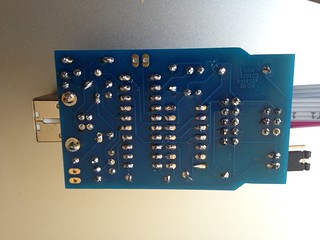 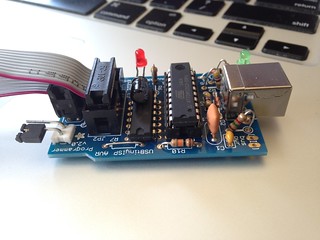 Once that was done, we tried programming the chip… 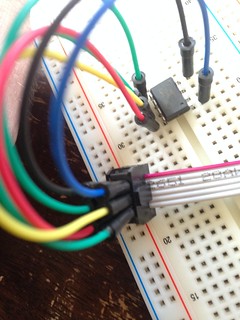 …and the trashing began. It turns out I didn’t understand how to read the pinouts from the programmer. But once we got help and re-wired and re-tried, we finally got it working! We were able to make our NeoPixel Ring do cool things via this nice code.

One of the things we want to do with all this is help Jack have an “arc reactor” and “repulsers” for his Iron Man suit, so we needed an easier way to program and test our chips, because it was a little hard to work with wires for programming vs. wires for trying things… 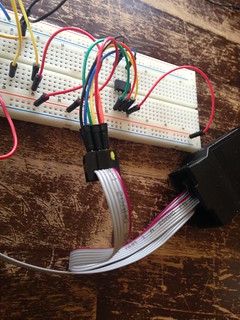 So this morning I made this… 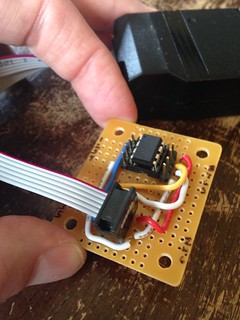 …which let’s me program and test easily without a bunch of jumpers and without having to keep moving the chip back and forth. Pretty sweet, and cost about $2 in parts (the board was $1.25).

Recently the weather was a bit odd; extremely humid and warm for winter. It turns out that apparently this does very bad things to our phone line. Our internet has been terrible; phone calls nearly unusable.

Hard to believe? Take a listen…

That just me holding my iPhone next to the phone receiver. On a clear dry day, it’s quiet and normal.

But how’s my DSL? Glad you asked. SNR Downstream around 6-10 dB (which seems pretty bad). Dozens to hundreds of retrains a day. (On a clear day SNR is fine and it really doesn’t retrain.)

So, of course we called CenturyLink. They sent someone out… two days later. Yeah, weather had cleared. Yeah, “everything was fine”. Sigh.

Really, really frustrating. Not sure I have any hope this will ever be fixed, unless we just get “lucky” and have humidity problems that coincide with a technician visit.

UPDATE (6 days and a few minutes later): Checked “Where’s My Tech” and it turns out my December 26th visit got quietly moved to December 30th. Sigh.

UPDATE (6 days and a few hours later): Yep, it happened. Over the last few hours humidity dropped to 60% and the line is clear, voice and internet. Both were unusable 3 hours ago. So grumpy.

UPDATE (yet later on the 29th): Clear voice line and seemingly good S-to-N on the modem, but modem reports connection speed is about half of what I pay for.

UPDATE (later on Dec 31): Nothing much interesting, but did see a SNR of -5 dB… haahaha!

UPDATE (about 4pm on Dec 31): Some progress! @CenturyLinkHelp jumped in and a couple of hours later a tech called me saying that he’d found and fixed bad wiring on the phone pole. Voice line seems clear now, as does SNR, but DSL speed is pretty low, so a little more work to be done.

For no reason I could think of, one of our Vizio TVs started having lots of problems connecting to the Wi-Fi. Even after a Factory Reset I couldn’t get things like Netflix to work, though I was able to reconnect to Wi-Fi and successfully test the connection.

Looking around on the internet wasn’t a lot of help, but there were two sets of things I founds that were useful… collected here to save someone pain.

That restored my ability to connect via Wi-Fi, but widgets still didn’t work, telling me to choose the HDTV Settings widget and set up my connection (which was already set up and working… BAH).

You should be able to connect via Wi-Fi and run things like Netflix now.

If this didn’t help, the Yahoo Widget Developer forum had the best information. (Those little apps on your TV are Yahoo Widgets.)

The Apple developer sites for both “Web Apps” and “Safari” are not responding at all. Ken’s Paranoid Prediction: Apple’s pulling back on the stunningly cool and advanced CSS functionality (transforms and animations) now available in Safari Mobile and iPhone native WebView in favor of the same functionality in native iPhone programming. WWDC09 is coming up in June… I guess we’ll see.

UPDATE: They’re back up… kinda… I’ll take the paranoia down to threat level yellow.

I know… you’re asking “so what?” Well, we’ve been working on this iPhone application for a while, and it’s just been accepted into the iTunes Store! Yay!

UPDATE: “We” being folks at Digital Cyclone, where I work. And mom, don’t click the link. I don’t think you’re using iTunes. I’ll tell you about it later. :)

In the midst of bringing the first public revision of flyGarmin to a close at work, a friend emailed me and asked if I could whip up an “instant web site” as his new startup company was about to get national attention. I had a week.

So I worked a normal busy day every day that week, and every night I came home and worked on the new site, kept company by my bride and my new John Adams DVDs. It went like this:

It was quite a week, but we got a pretty nice site out of the deal. And the great part was that I was able to make it client-maintainable right from the beginning. Open source is the coolest. I know that folks who love Drupal really love it, and I can tell it’s really powerful, but it just wasn’t “jump-in” intuitive like Joomla.

Get this, and get it straight: Crime is a sucker’s road and those who travel it wind up in the gutter, the prison, or the grave. There’s no other end… but they never learn.